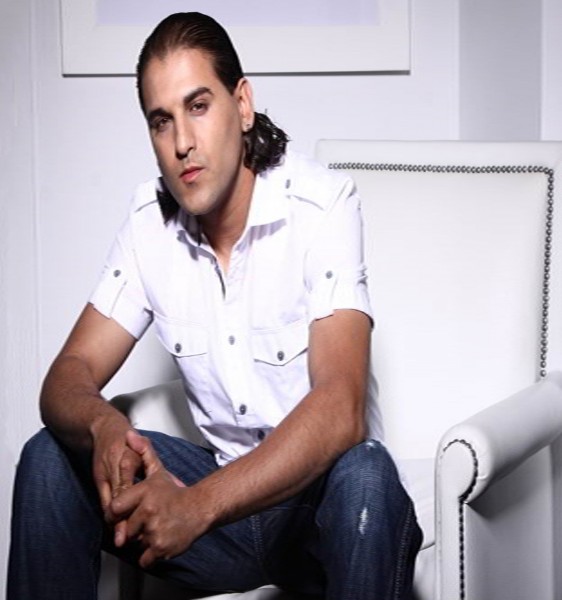 DOMENIC MARTE, born in Lawrence, MA., is of Puerto Rican & Dominican descent with the capacity to interpret and perform outside the sometimes confirming realms and speculations set forth by specific musical genres flowing from these two Caribbean wonderlands as he cleverly fuses rhythms, sound and talent effortlessly in his Bachata Pop style sound.

DOMENIC MARTE is not only multi-talented, but a man with a bright future ahead. Of the 16 songs that cohabit in 1st album, he wrote six on Intimamente & also on “Deseos De Amarte” and The NEW album “The Voice” He not only wrote but also majestically produced one of the tracks, “Find Another Man”. That alone makes quite a statement as to the many hats DOMENIC MARTE is capable of wearing; artist, producer and song writer. 4 of the album tracks are performed in English while the remainder of the album is in Spanish. The album consists of a variety of musical styles from Latin Pop and Bachata to some smoothed out R&B.

The first single, “VEN TU” in 2004 with close to 2 millions hits on Youtube was sizzling in every sense of the word; a modern day Bachata, spiced with Latin emotion, passion, style and flavor, produced by Gio Williams and brilliantly written by Wascar Brazoban, but it’s DOMENIC MARTE soulful sense of interpretation that makes the song sultry and alive. Today Ven Tu is a world wide hit in MANY Latin Countries around the world and Europe. The Album “Intimamente” also had other hit songs like
“Ella Se Llevo Mi Vida Feat Geraldine” “La Quiero” “Yah Que te Vas Ir” that where top 10 songs on Latin Tropical, Spanish Contemporary & Regional Mexican radio stations around the US and abroad.

DOMENIC MARTE kept going with his courage to inject the Latin Music Bachata Industry with a NEW album entitled DESEOS DE AMARTE using his outmost creativity to unite both Pop music and Bachata of which is known to be fully Tropical, has demonstrated his talent, abilities, and creativity as an artist who is willing to add an extra bit of spice into the “traditional.” It is a great risk, yet as he has previously proven with his previous success songs in the past “Ven Tu”.

DOMENIC MARTE has more to offer to the higher demand for his fans. Being the ORIGINATOR of the Bachata Pop music Style a new and revolving culture of Bachata Pop worldwide. Domenic Marte using his passion and dedication has pursued this new “twist” to further his sound with his NEW 2014 3rd album entitled “THE VOICE”. It is because of his transparency and passion for the music Bachata Pop that he is fearless of failure, but demonstrates his talents to be innovative and willingness to accept the requests of his fans globally & why they refer to him as the “Gipsy of Bachata” THE VOICE has proven to be another album that has captivated Latin Tropical Stations, Spanish Contemporary & Regional Mexican stations in the US and abroad with “Muero De Celos Feat Luz Rios” peeking at num 4 on the Billboard Tropical Charts.

Domenic Marte also featured his duet with Luz Rios on Sabado Gigante with Don Francisco on Univison on the 50th Anniversary of Sabado Gigante that was featured on the weekend of Thanksgiving 2012. Primer Impacto Univision also came down to do an exclusive on the video behind the scenes on “Muero De Celos” that was featured on their show. “The Voice has made is way thru the Latin Tropical Stations with “Horoscopo” “No Se Por Que” “Despues De Ti No Hay Nada” all top 10 hits across the Tropical, Spanish Contemporary & Regional Mexican radio stations in the US & abroad.